Green Connexion, observer of the COP 14

Green Connexion, observer of the COP 14 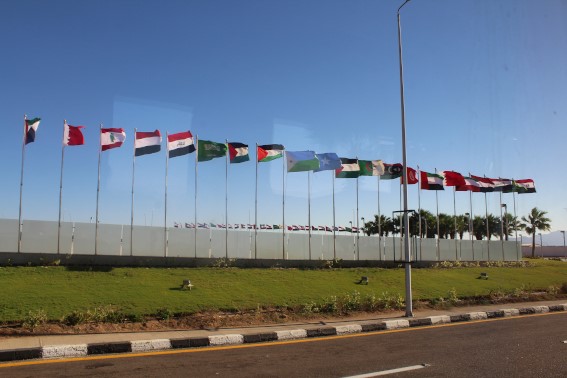 The summit of universality

This Thursday, November 29, 2018 will end in Sharm El Sheikh in Egypt, the fourteenth biodiversity Conference Of Parties (COP 14). The theme of the conference this year was “Investing in Biodiversity for People and Planet”. Conference of the Parties? Yes, but not only. The nearly 3000 participants in the conference this year, from all over the world, are made up of the parties (so far 168 signatories of the Convention on Biological Diversity and 196 parties), observers, representatives of IGOs, NGOs , renowned scientists, civil society figures, public figures, politicians, journalists, etc.

Biodiversity is at the center of the meeting. Still, the conference of the parties is a good excuse that allows to gather for two weeks all the peoples of the world at the same place on the earth, to give them the opportunity to work together on the feasibility of a common goal. The Convention on Biological Diversity (CBD), because of its essential and existential character for humans, is one of the biggest initiatives of the United Nations in the last 25 years. Beyond its ultimate goal of protecting, conserving and even restoring biodiversity, the Sharm El Sheikh Summit is finally a summit celebrating universality. 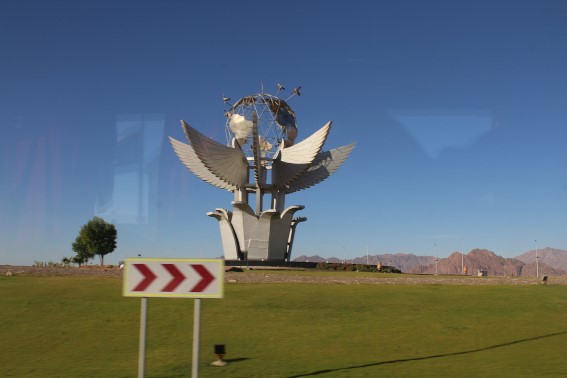 When the Egyptian President Abdel Fattah al-Sissi comes to inaugurate the launching of COP 14 activities on November 17, 2018, the observer that we are has the impression, founded or not, that his country is preparing this moment for a dozen years. In fact, the preparations seem to have been settled in the smallest details:

– The city of the conference

Egypt chooses the city of the conference on purpose. Indeed, next to its strategic position since nestled between the desert of the Sinai Peninsula and the Red Sea, Sharm el-Sheikh is a seaside town. It is famous for its secluded sandy beaches, clear waters and coral reefs. It is a strongly touristy city where many hotel formations sport up to 700 rooms. 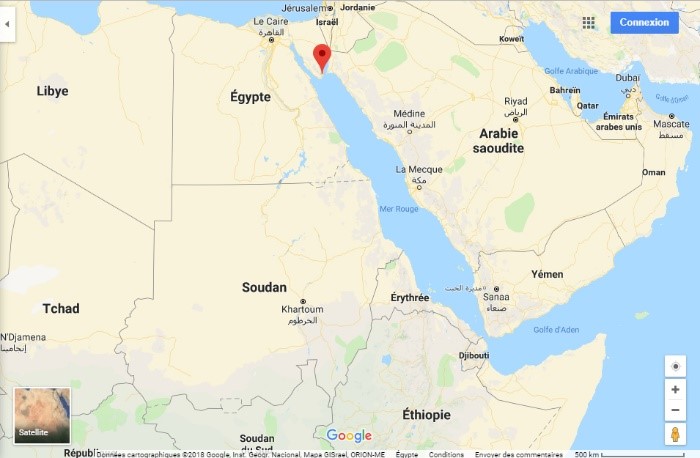 Location of the city of Sharm El Sheikh (red bubble), open to the Red Sea.

Opened at the beginning of 2006, the International Congress Center of Jolie Ville in Sharm El Sheikh is built to host large international meetings and it is appropriate to organize the COP 14. This center is remarkable for its facilities, especially a “Summit Room” with an area of 2200 square meters, more than 11 meeting rooms with an area ranging from 140 to 800 square meters, 6 VIP meeting rooms with an area of 55 square meters, cabins d modern audiovisual installations and an advanced lighting system. The entrance is 240 m2 and is equipped with a registration area. It is in this center that other international meetings such as the World Economic Forum and the International Youth Forum have been held.

– Security at the height of the event

The security of the COP 14 is ostensible or unobtrusive, ubiquitous, and even shocking. In addition to more than 100 armed UN peacekeepers in United Nations uniforms, plainclothes or uniformed, but still armed, hooded snipers provide uncompromising security. The reality is that we do not receive more than 196 delegations from virtually every five continents, like one would receive a neighbor during a courtesy visit. In addition, prominent Egyptian political figures came to the COP 14 meeting, namely the President of the Republic of Egypt and the Governor of South Sinai, which alone could justify a greater security effort. . However, we are in Sharm El Sheikh, and it is still fresh in memory that famous night of 22 – 23 July 2005, Egyptian National Day, where a series of seven almost simultaneous explosions made 88 dead and more than 200 wounded. Rather than being criticized, well thought out, faced with the same situation, this example deserves to be copied rather. 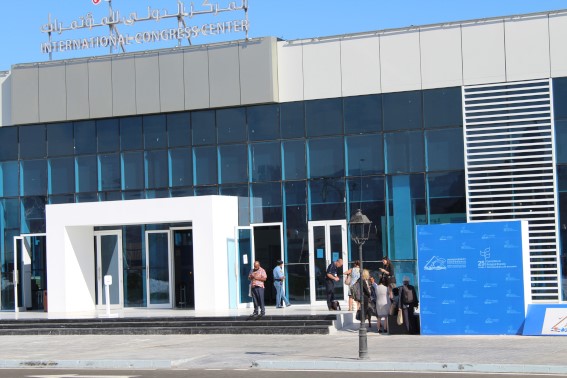 There is no perfect organization. However, we can say that Egypt’s effort in organizing the COP 14 can be appreciated. Although coastal, Sharm El Sheikh is not a particularly wet city, and even the visible sand dunes and bare lateritic domes extend to infinity. Yet, a stranger can easily appreciate the human efforts that have been provided recently to make the city more welcoming.

By organization, we refer to the introduction of the invitations in time, the diplomatic facilitation of obtaining visas, the organization of travel and accommodation, the reception of participants, transport etc. There is also a very important effort in social communication. Indeed, all the streets of Sharm El Sheikh as well as any corner of the International Congress Center of Jolie Ville are emblazoned with the signs of the COP 14. Plenaries and side events are organized with care. 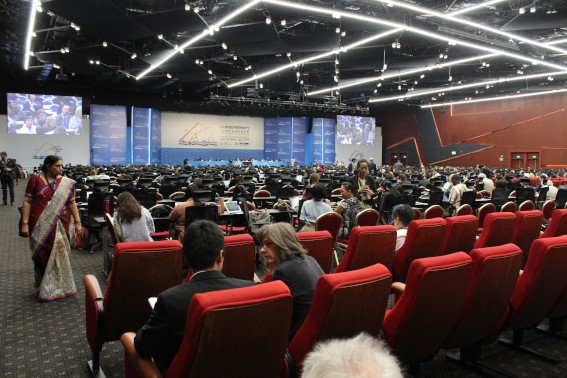 A plenary session of COP 14 in the Summit Room. Photo @ greenconnexion, November 2018.

The thirty items on the agenda have been executed. Of those entrusted to working groups, many have already been discussed in plenary, corrected and then adopted. The various reports produced as a result of these treatments are online at https://www.cbd.int/conferences/2018/cop-14/documents. As we close this paper, some points are still under discussion in plenary, but as was often the case at this conference, consensus will always be found and final resolutions adopted.

There is no perfect work

COP 14 held the promise of flowers. However, some gray areas need to be identified to help improve the future.

Maybe it was for security reasons mentioned above? The truth is that no one knows in which room the Sharm El Sheikh congress will be held until the day of the congress itself, and the program communicated in advance is simply indicative. 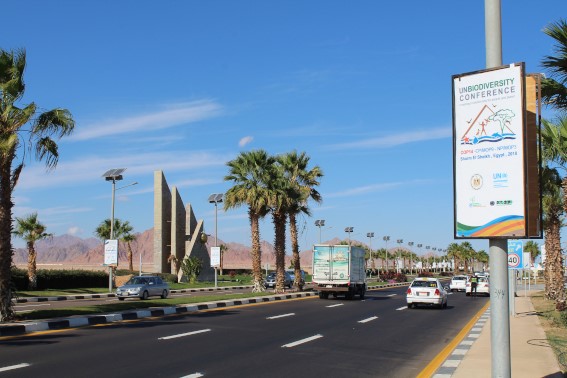 – No money for the poor

It is difficult to speak on behalf of the whole world, however we can recognize that the non-governmental organizations sitting as observers or not, invited to the COP 14 participated on their own funds, regardless of their age or their geographical belonging. We take this opportunity to remind the international opinion that, sometimes among the most active in the protection and conservation of biodiversity, most young non-governmental organizations or serving in developing countries have relatively low resources. Yet, concretely, their action in the field of conservation sometimes goes beyond the effort of the states themselves. This is the place here for us to appeal for financial support of these organizations for their upcoming participation in the Conference of the Parties. NGOs of African descent have done their best to participate in COP 14 in Egypt, and very often with only one member to represent them. Will they be able to attend the COP15 in China?

And as COP 14 comes to an end, we sincerely believe that the Egyptian flag can float even more proudly in the sky than before, until we all meet again in China for COP 15 in 2020. 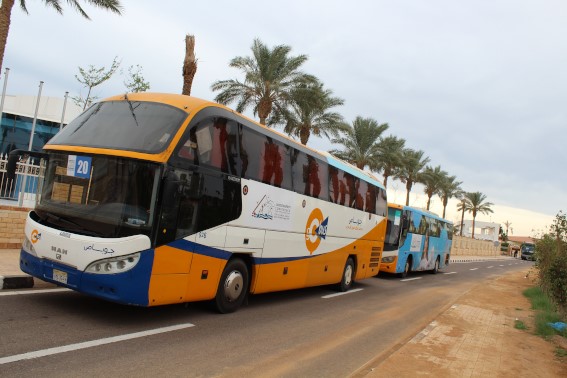 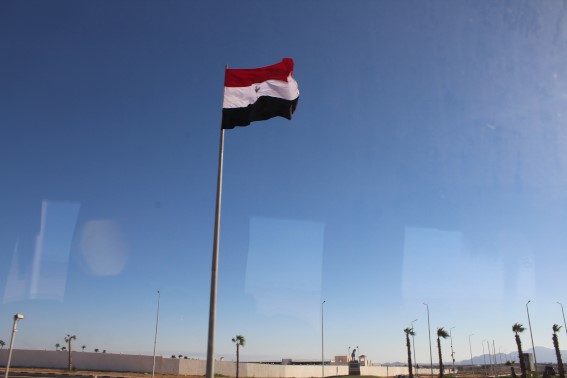